“You make your money on the buy, right?”

If there’s one saying, one truism, one Holy Grail in real estate it’s “you make your money on the buy.” Everyone who wants to sound smart in the real estate community makes this pithy statement with a smug air of worldly knowledge. Who in their right mind would ever challenge that statement?

The basic metric for a house flipper is you can pay no more than 70% of ARV (After Repaired Value) minus repair/holding/sales costs. So if the back end sale of your flip is $200k and you’re going to have $20k in repairs, holding costs, and sales costs, you can pay no more than [70% (x) $200] – $20k = $120k. For flippers you need a great deal in order to make money, and this is where the saying came from. So far so good.

Where the metaphor gets mixed (speaking of a mixed metaphor…) is when the saying is used in the long term, buy and hold, cashflow world. Or misused rather. Because the truth is, while it’s always a great goal to buy property with existing equity, if you’re a longterm investor it doesn’t really help all that much. Surprising but true. Sure, it helps a little to get a good deal, but at what cost? That’s the key question that no one ever asks. At what cost! So let’s talk about it.

Having invested in real estate for 20 years and helped investors buy properties for the last 13, I see the “make your money on the buy” saying hurting the average buy and hold investor a lot more than helping them. The simple reason is that I have seen dozens, maybe hundreds of potential investors never buy even their first investment property because they couldn’t find a “deal”. They went to a weekend seminar or maybe bought a $20,000 guru mentorship and what they learned is you have to find “deals”. It’s all about “deals”. Because you make your money on the buy, right?!?

And so often I have seen these investors fail completely and utterly in real estate and never, ever, ever buy a property. And that’s a tragedy.

Let me give you a real life example.

You Always Make Your Money On the Buy – Or Do You?

In 2008, I showed a property to an investor client of mine who was looking to buy his first rental. He was a nice guy. Smart. Eager. Ready to go.

A pretty beat up property in a tough neighborhood in the depths of the downturn. The bank was asking $79,900 for it (at the height of the market in 2006 it would’ve sold for about $140k). They wanted an as-is offer with cash or a 30 day close. The listing agent was a friend of mine who sold tons of back-owned properties so we had a little advantage there, but basically needed to come in with an offer the bank would accept to get this dog off their books.

We wrote an aggressive offer at $66k, close in 30 days with a strong local lender and sent it in. A couple of days later we got a Counter Offer from the bank at $68k. They implied that was their bottom line but of course you never know.

A Conversation That I’ll Never Forget

I asked the listing agent if there was a chance they might go lower and she said… of course you never know but no, she felt that was their bottom line. So I discussed the situation in detail with my client and I’ll never forget the conversation.

He told me, you always make your money on the buy and said he would not go a penny over $66k. He felt that $66k is what it was worth and was happy to play chicken with the bank. I suggested he move his price up at least a little if for no other reason than to show a little flexibility, but he refused. He explained to me that he was a tough, smart, aggressive take-no-prisoner investor and the bank be damned, he would pay only $66k!

Ok, so I went back to the listing agent and told her we were sticking with $66k. A couple of days later the bank formally rejected our offer. My client refused to go higher than $66k. So the deal was dead.

The listing agent let me know we were close but she didn’t think the bank would go below $68k. So she told me try to fund another buyer ASAP. I did. I brought in a new investor who was a commercial airline pilot looking to do his first deal in Denver.

I explained the entire situation to him and he had me write up an offer for $66k. The bank reviewed it and Countered at $68,800. My buyer accepted it with no hesitation and we got it under contract.

He went on to buy a bunch more properties over the next couple of years in both Aurora North and Aurora South and made money on every one. (Among many other things, he now owns a 47’ brand new catamaran sailboat that he keeps in the Virgin Islands).

In November, 2016 he told me he wanted to take a little money off the table and asked me to list Jamaica St. His tenant moved out January 30, 2016 and we went through the property in detail to decide what work to do to it. I suggested he actually do a good amount of work to the property in order to get top dollar selling to a first time homebuyer instead of an investor.

Here’s what he did: 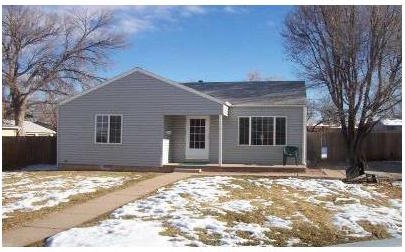 A conservative estimate of cashflow shows us the investor made an average of $10,000/year in pretax Net Operating Income (NOI) on Jamaica St.

His back of the napkin math capital gains was:

Just for fun I put the numbers into my financial calculator and the $13,760 investment returned 42.12 percent per year, amazing! What’s even more amazing is that if he had bought the property for $66,000 instead of $68,800, his Internal Rate of Return would have been exactly 44.57 percent per year, a return of just 2.45 percent more per year. This is what I mean by keeping the big picture in mind, by not losing the forest for the trees, by being a real investor. I’ll take the 44.12 ROI every day of the week thank you very much.

The lesson here was that my pilot was willing to see the long term big picture and pay $68,800 for the property whereas my other client refused because he wanted to drive a harder bargain. He wanted to be a tougher negotiator. He wanted every last dollar and was willing to risk the deal on it. And he failed miserably because of his short term intransigence. For me, a lesson very well learned.

Everyone Wants a Great Deal in Denver, but at What Cost?

Let’s look at this a different way. I would argue that my client that didn’t buy 1250 Jamaica St. in 2008 paid a heavy cost for what he defined as the requirement of a great deal. The way I see it, we investors need to weigh what it takes to actually get a “deal” with the expected return of the deal.

As an extreme example, if there was exactly ZERO percent chance an investor could get what he or she defines as a deal, then obviously they will never find one and never make money in real estate. They should find another way to invest their money and forget about real estate.

Now let’s say there’s a 10 percent chance they’ll find their definition of a deal, well now they can weigh that against what percent chance they have of acquiring just a “good deal” and decide for themselves what they want to do. There’s no absolute answer, it’s just a matter of weighing the chances of each and making the correct decision for yourself instead of blindly following a truism like “making your money on the purchase”.

Calculating the Real ROI on a Real Estate Deal

Another way of looking at this is how much work/money/risk it takes to find a great deal. Let’s say your best guess is it would take 100 hours of work to find a deal. Then multiply that by your dollar/hour and that will tell you what your cost is of finding that deal. That total will have an impact on your ROI.

Yet another way of looking at this is the money it might take to find a deal. Let’s say it will take you $5,000 in mailers to track down a deal, then add that to the purchase price of the deal to compare it to a different investment.

One last way of looking at the potential costs of finding a great deal is the financial risk it would take. If you buy from a wholesaler typically your earnest money is “hard” as soon as you go under contract. If you find there’s a $10,000 break in the sewer line during inspection, tough luck. You’re buying the deal or forfeiting the earnest money.

One way of visualizing what I’m talking about is using the brilliant graphic I created below (ok, not that brilliant but it gets the point across). 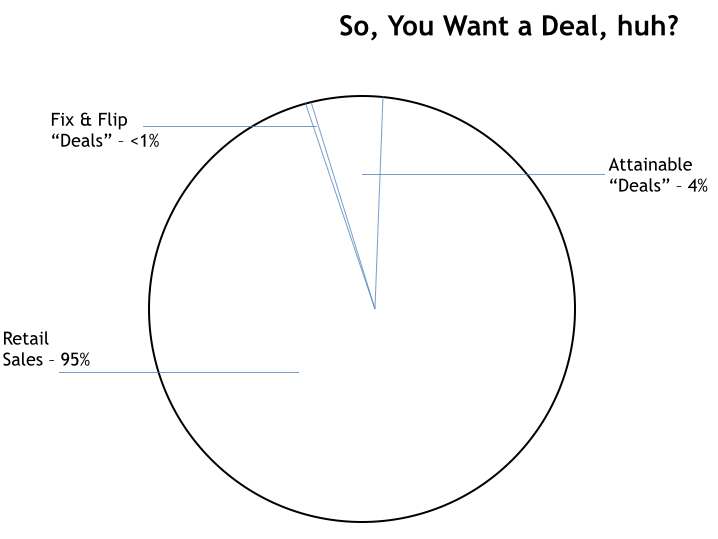 Roughly speaking, you have about a 1% chance of getting a “great deal”, depending of course on how you define a great deal. The better the deal, the lower the chance you have of finding it.

Next, you have about a 95% chance of getting a normal, retail sales purchase. This would be a typical property on the MLS that you can bid on 7 days a week and have a good chance of getting.

Finally, you have about a 4% chance of getting an “attainable deal”. I’d define this as a property probably on the MLS that isn’t 30% below market value, but is still a solid, well negotiated investment that you purchase a little below market price by making lots of strong offers and presenting yourself as a professional investor. It’s not the world’s greatest deal, but maybe 3-5 percent below market. It’s real and doable with a bit of work and patience.

So in this simplistic example, you have 3 choices:

Of course, these are rough numbers, not to be taken literally but they are directionally correct. It depends on what you define as a deal, market dynamics, your investing and marketing abilities, how good your team is and on and on. But it illustrates my point that if you aren’t analyzing all of these inputs and just relying on “making your money on the buy” you are not giving yourself the best opportunity to make longterm cashflow with rentals.

Play around with these concepts and let me know what you think in the comments below!

Recommended Resources for the Denver Investor