On January 19th, the Denver Post ran an article on the Denver rental market suggesting the bottom was falling out. They said:

“Metro Denver apartment rents fall again… thousands of new apartments continued to pour onto the market in metro Denver last year, pushing down rents and pushing up vacancy rates to their highest level in seven years.”

Anyone reading this article would presume there has been a dramatic turn in the market, rents are falling, landlords are in trouble and renters will once again have the upper hand over landlords. I mean, that’s pretty much what it says! I would argue the Denver Post was torturing statistics in an effort to write a news splashy article that doesn’t even come close to representing what’s happening in our rental market. Let’s take a look at the facts.

Yes, thousands of apartments are coming on the market, but the majority of them are in the higher-end segment and won’t affect most landlords and tenants who work in the lower to middle segments of the market. Even more importantly, the Front Range is growing by 40,000 – 50,000 residents per year, so while thousands of apartments are indeed coming on the market they don’t even begin to meet the demand of the existing 3.1 Million population, nevermind the huge influx of residents moving to Denver. A more reasoned analysis of the statistics would include this one: 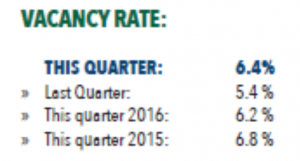 From this you see vacancy rates for 5+ unit buildings in metro Denver have remained flat since 2015. Nothing alarming about this.

Here’s another important statistic to better understand the reality of our local renter market.

So while rents dropped a bit in the last quarter, that is based on normal seasonality of the rental market. The fact is rents have risen steadily in the past couple of years. Let’s dig deeper into rents and vacancies with this graphic.

Here you see vacancy and rents going back to 2012. I ask you, is there anything AT ALL alarming about these numbers? The green bars show average rents, which have increased steadily since 2012. The blue line is vacancy rates which have remained flat the past several years, and are just a hair higher than they were in 2012. Nope, nothing cataclysmic about these numbers either.

The lesson here is to closely at the data when trying to assess the market, don’t listen to the interpretations of the press (or real estate agents, or lenders, or bloggers etc. etc.!) when trying to understand the market. Just look at the data. My view of this data is that the market is in a multiyear upturn for landlords as rents have risen and vacancies have remained low. With the large influx of folks to our market I expect this to remain for awhile.

Someday, rents will flatten out and vacancies will rise of course. But the Denver Post did a disservice to their readers by selecting the most hyperbolic data they could find in order to write a misleading article on the state of the market to sell a few more papers.